Solar charge on the go

Solar Power on the go. For whatever you need to charge.

I thought I had a lemon on my hands.

I took the SSB2210 Solar Storage Bank to Kilimanjaro – the highest mountain in Africa – to use as my only battery charger while climbing the mountain.  Throughout the week-long hike, I struggled with my phone not responding to the charging cord provided with the Bank and the battery charging and then quickly losing battery while still plugged in. I thought the bank was sucking my battery juice.

It turns out the lemon was my phone battery, not the Bank. When I got home my phone wouldn’t respond to any charger or charging cord and was dead for two whole days.

It turns out I had brought a dying phone to hike Mount Kilimanjaro and the SSB2210 Solar Storage Bank was trying its hardest to essentially shock it to life. But it couldn’t charge what wouldn’t charge.

When full, the Bank should be able to charge phones 3-5 times and tablets/other devices with a standard USB power port 1-2 times.

The only issue I found while charging devices (excluding my funky phone) was that the Bank doesn’t automatically shut off when done charging devices. You need to remove the device from the cord for it to turn off or hit the on/off button twice to shut it down.

There are two outputs on the Bank, so two devices can charge simultaneously. Output 1 senses the device connect and turns on the Bank to charge automatically. Output 2 requires the user to push the Bank’s on button to begin charging the device.

First you unfold the Bank and allow the four solar panels to capture the sunlight. While hiking I attached the solar panels to my backpack using carabiners. This allowed for me to charge the Bank while on the move.

I saw other Solar Storage Bank users attach theirs to tents when at camp. I laid the bank on the ground to charge when I was stationary—mostly at hotels.

Charges great! But don't try to charge a faulty phone.

“It is easy to use, convenient to carry and a phone-charging life saver. As long as your phone isn’t a lemon like mine.”

The Solar Storage Bank folds up for easy carrying—and packing. The 10,000 mAh power bank only weighs 1.8 pounds and the four 22 W solar panels fold into the size of one. I brought the Bank in my carry-on and forgot it was there. The two charging cables and light accessory that come with the Bank fit nicely into the zipper pouch and weren’t in the way at all.

I recommend the SSB2210 Solar Storage Bank for travel, outdoor use and use in the home for times when the power goes out. It is easy to use, convenient to carry and a phone-charging lifesaver. As long as your phone isn’t a lemon like mine. 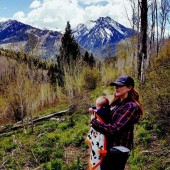